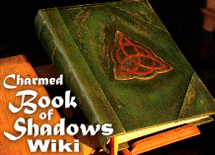 Welcome to the Charmed Book Of Shadows Wiki

This Wiki, dedicated to the Charmed Book of Shadows, is filled with every page that has ever appeared through the 8 seasons of the show. The best part is that anyone can edit the pages so that the Charmed world will know what is happening with the Book of Shadows.

The Book of Shadows[]

The Charmed Ones' book was started by Melinda Warren, who began the Warren/Halliwell line of witches, with the year "1693" written on it's cover page. Although it was fairly small then, each succeeding generation of Warren witches had added onto it, particularly information on demons, but also on other supernatural things and magical items they came across and felt necessary to be journaled. One of the earliest entries that was around when Melinda was alive included a curse, and possibly the entry which details the coming of the Charmed Ones, through carvings, (mentioned in Something Wicca This Way Goes), though this could've been done by a future descendant . After Melinda was burned at the stake, the Book passed to her daughter Prudence, and was passed down throughout the generations.

Penny Halliwell, often noted that she created most of the potion recipes in it, and the only other entries we know for a fact that she wrote was the entry on the Necromancer, the Stillman Sisters and Gammill, The Collector. Patty Halliwell added text on Barbas, the Demon of Fear, and also, the page on how to properly raise and nurture magical children. ("Happily Ever After," "From Fear to Eternity," "Reckless Abandon")

The Charmed Ones themselves have added information, spells and potions, as well, for future generations. The first entry they made themselves was "Woogyman Spell", or how to banish the Shadow of the Nexus. Phoebe added a page on Cole Turner, Belthazor's human half including personal information like his favorite food and hobbies; "anything that could help future witches" after he'd broken her heart. This was reminiscent of the alterations Penny made to the Necromancer page, adding such things as "likes Clarke Gable movies" to aid in her getting over the end of their romantic relationship. Phoebe also wrote an entry on the warlock Anton. ("Is There a Woogy in the House?," "Pardon My Past," "Look Who's Barking," "Necromancing the Stone")

Leo added the entry titled, "Tips for Future Whitelighters," logging information about whitelighters and how to properly use their powers, for his sons, Chris and Wyatt, just in case he wasn't around to teach them, himself.

A few spells in the Book of Shadows are used for personal gain. No explanation has been given to why such spells would be in the Book but it's likely that these spells were put in to teach future witches about the personal gain consequences; or as to they served a magical purpose to deal with evils of the time.

Community content is available under CC-BY-SA unless otherwise noted.
Advertisement